Today I've got three polished from Muppets Most Wanted to show you!  Here's the photo and description from OPI: 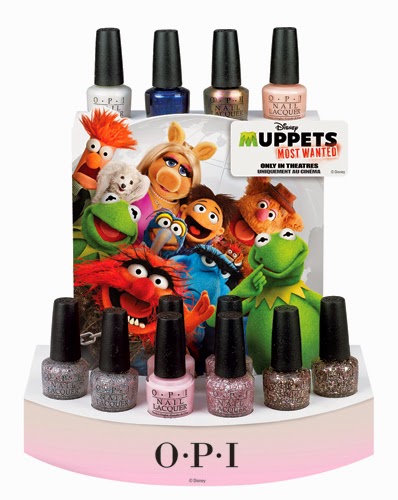 OPI has teamed up once again in a partnership that is sure to amp up the volume on happiness and fun. And when it comes to happiness and fun, OPI Nail Lacquer is synonymous with The Muppets. The surprising situations that develop as they embark on their world tour in "Disney's Muppets Most Wanted" inspired Suzi to create a suite of shades that represent that unexpected element, like brand new, special glitters with high shine and unusual shapes and a metamorphic shade named for Kermit, which appears to shift from gold to mauve, a nod to the confusion created by his doppelganger Constantine. But one thing we can still count on is the glamour that is Miss Piggy, captured in a frosty sapphire blue to match her oh-so-fabulous stage gown.


I own very few OPIs because I'm pretty clumsy with the wide brush, but some of these shades were to cute to pass up.  First up, Kermit Me to Speak (a play on "permit me to speak;" that one took me a while), a gold/mauve duochrome:

Next is OPI International Crime Caper, a beautiful pearl white with pink shimmer and very tiny, hard to see blue flecks.  They're a lot easier to see in real life; photos don't really do this one justice.  It reminds me a lot of some unknown polish my best friend and I used to wear all the time in the 90s, so I am really drawn in by the nostalgia factor.  This is four coats, and you can still see the nail line.  I like it on its own, but it would also be great for layering.


My favorite polish from this collection by far is International Crime Caper.  It's so pretty on its own and has the added fun of layerability.  Kermit Me to Speak is a very pretty, shifty duochrome, but I'm not crazy about how purply it could look at times (if you like purple, you will love it!).  Let's Do Anything We Want! was a bit underwhelming but is still a unique glitter.  I don't think I have anything close to it in my collection.

What colors will you be buying (or have you already purchased)?

*OPI is cruelty-free according to their website, which says that "[n]either OPI nail lacquers nor any other OPI product or service is subject to animal testing."  According to OPI's response to further inquiry by Teeth Tres Chic, OPI does sell their products in China but denies that China has insisted on their compliance with the "theoretical" animal testing requirement.  OPI's parent company, Coty, is not cruelty free.